NATURE EXPERIENCE FOR THE ENTIRE FAMILY!
OPEN 7 DAYS A WEEK FROM DAWN 'til DUSK!

History of the Townsend River Walk

A History with Deep Roots 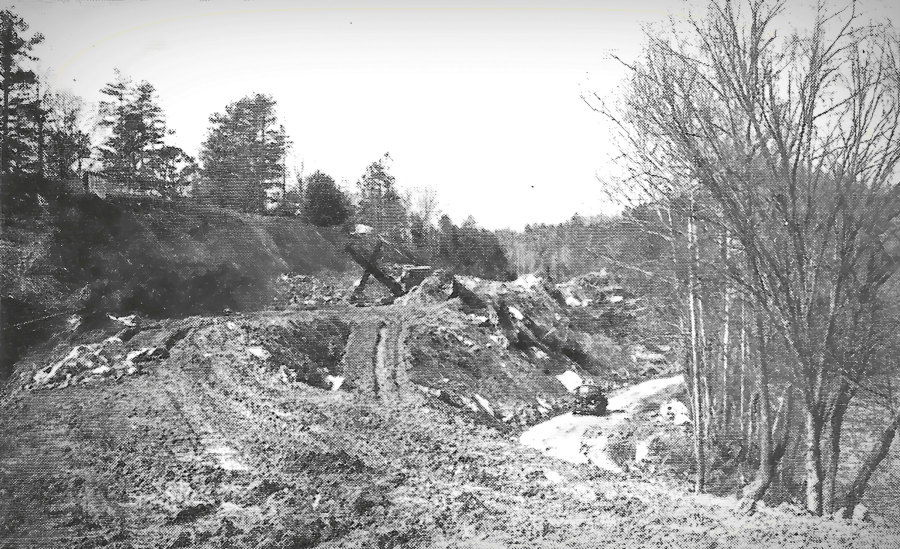 New 73 being built in the early 1940's. The truck to the right is on old 73 that ran along the Little River. Little did they know that over 60 years later old 73 would become the main trail of the Townsend River Walk & Arboretum.

The Tuckaleechee Garden Club, a member of the Tennessee Federation of Garden Clubs, of Townsend, TN collaborated with the City of Townsend in establishing the “Townsend River Walk” along a 3/10-mile stretch between the Little River and Highway 321. The site of the project developed as a result of the widening of Highway 321 through Townsend from a two lane to a four-lane road. This lengthy process resulted in the establishment of bicycle and hiking paths along the highway. At one site the paved hiking/bike path veered toward the main road and away from the Little River. Since traces of old Highway 73 were still evident in this area, the Club and the City identified this area as a perfect site for a quiet walkway along the Little River.

The Garden Club has undertaken the primary responsibility of maintaining the River Walk since its conception in 2004. The walk benefits local residents, hikers, and the many tourists in the area who utilize the hiking and bike trails in the Townsend area. Members, along with volunteer help of husbands and community members, have made a major start in removing invasive species, concentrating on the highway side of the trail for the first two years. Large sections of privet, many over twenty feet tall have been removed so that ongoing control is feasible. During the early years, several members walked the trail area picking up trash and debris that had accumulated over a long period of time.

The initial project also involved additional clearing of the trail along the old roadbed and adding mulch to the area. The City of Townsend arranged for the tree service company that handles the cutting of trees for TDOT to deposit mulched tree remains on the side of the road near the trail. 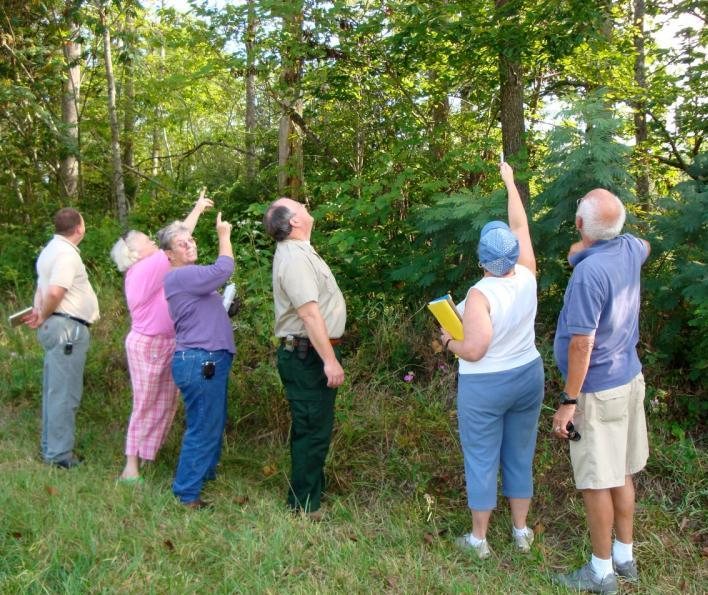 A PECAN TREE IS DISCOVERED! Taken September 2008 with TN Department of Agriculture - Forestry Division (Tom Simpson, who certified the arboretum originally as well as the recertification, and Nathan Waters. They helped to identify trees and suggested how to label them. From left to right, Nathan Waters, Barbara Spence, Florence Byrd, Tom Simpson, Elaine and Bob Russell. Charlotte Miller - Photographer.

A Trail for Everyone to Enjoy

The River Walk site is open to the public at all times. Members of the Tuckaleechee Garden Club work on the trail at least once a month. All trail personnel are trained in proper clearing around the trees. The only herbicide treatment used in the area is on cut surfaces of invasive trees and shrubs due to the proximity of the Little River. Because of the forest like environment, additional mulching around the trees is not necessary. The Tuckaleechee Garden Club feels that the establishing of an arboretum fulfills the Nature Trail category and will enhance the experience of those who hike the trail.