NATURE EXPERIENCE FOR THE ENTIRE FAMILY!
OPEN 7 DAYS A WEEK FROM DAWN 'til DUSK! 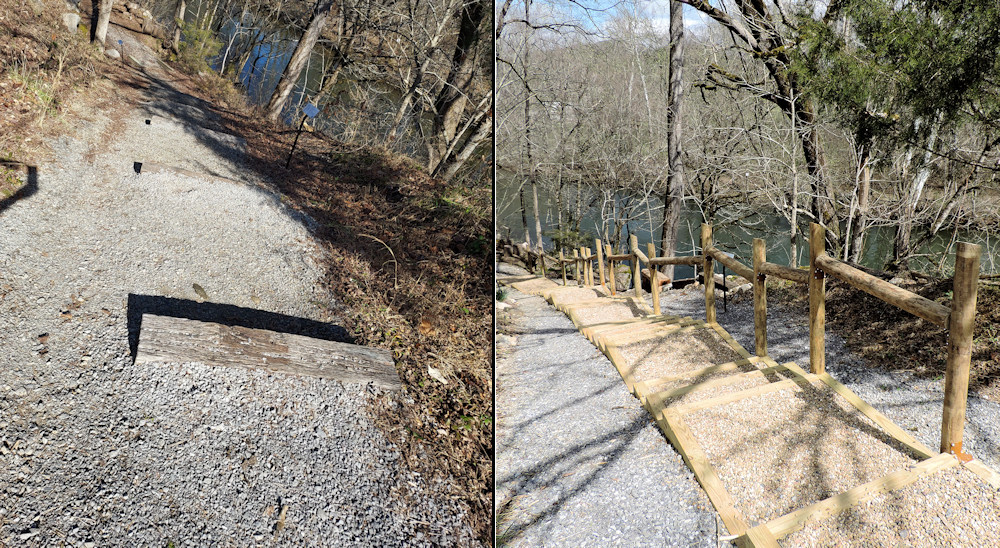 Before and After of the Slope on the South End of the Townsend River Walk & Arboretum! 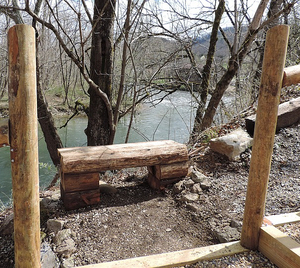 Bench Added to the TRWA Steps. Created by Rodney and Allison Pearson. A great view of the Little River.This is a project that has been on the wish list of the Tuckaleechee Garden Club since back in 2008.  It was obvious that something needed to be done and there was a fix put in back in the early 2010's with railroad ties.  That brought a bit of erosion control and made it easier to climb the hill.  A lot of work was put into it by Tuckaleechee Garden Club and Blount County Master Gardeners to make this happen and had served well until in 2020 we started noticing decay of the railroad ties and know it would be just a matter of time that the stairs would need replaced, but who was going to take on that task and at what cost?

I (Mark Seder) announced in November 2021 that I would start the planning, preparation and installation of the south end steps in the winter of 2021/2022.   With a design in mind and ready to start the demolition, I was approached by Rodney and Allison Pearson and they would assist in completing the new steps.  Little did they know the time and effort that would be involved or the satisfaction of creating an incredible stairway to the lower trail of the TRWA.  On December 16 2021, I laid out the first two stairs that would end up being the start of a 30 step stairway that spans 63 ft. Rodney and Allison were there to help on the 17th of December until the last railing was installed on March 10, 2022.

At every step of the way (No pun intended) Allison and Rodney supported the project, we worked together incredibly well and enjoyed building this massive undertaking.  I am also grateful of the support from the Tuckaleechee Garden Club who entrusted us to complete this project and provided much of the funds.

Stop by and give them a try and take in the view of the Little River.

If you would like to donate to support what we do at the Townsend River Walk & Arboretum you can do so HERE!

Additional Articles on building the steps can be found here:

Here is the completed picture portfolio of the work that was involved in creating these steps.

Putting a little weight behind some minor adjustments.

The railing posts were constantly checked for level.

Lots of attention went in to securing the railing correctly with little give. 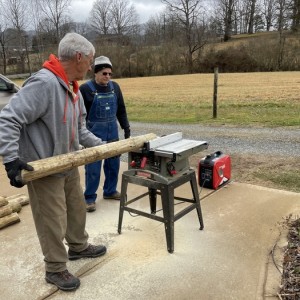 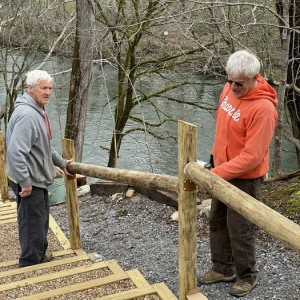 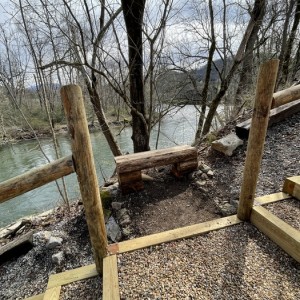 Bench is made from logs dating back to the 1800's. Thank you Rodney Pearson for this special addition to the TRWA. 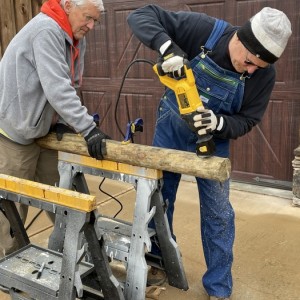 Notching out the posts to fit the steps.

A before and after of the South entrance of the TRWA.  Mark Seder, Allison Pearson and Rodney Pearson worked on this starting the end of December 2021 and completed the railing installation on March 10, 2022. 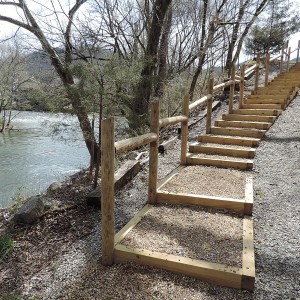 A panorama of the all 63 feet of the steps.  Thanks to Mark Seder and Rodney & Allison Pearson for their hard work and having completed installing the steps on New Years Eve 2021. 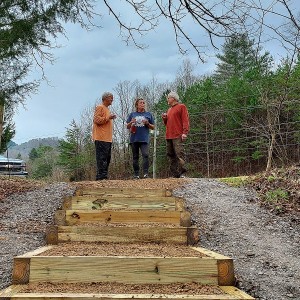 Talking over the last 3 weeks of the step installation and planning the railing for the steps to be done in the Spring. 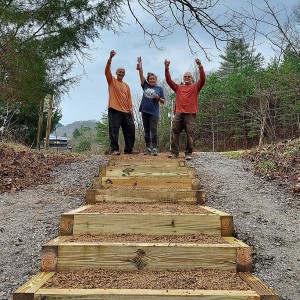 A Time to Celebrate!  Rodney, Allison and Mark after some of the toughest work done on the TRWA to-date. 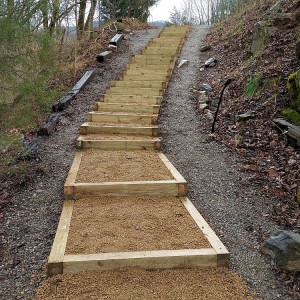 Completed steps from the bottom.  The graceful curve in the steps was hand eyed by Rodney and Mark. Turned out great. 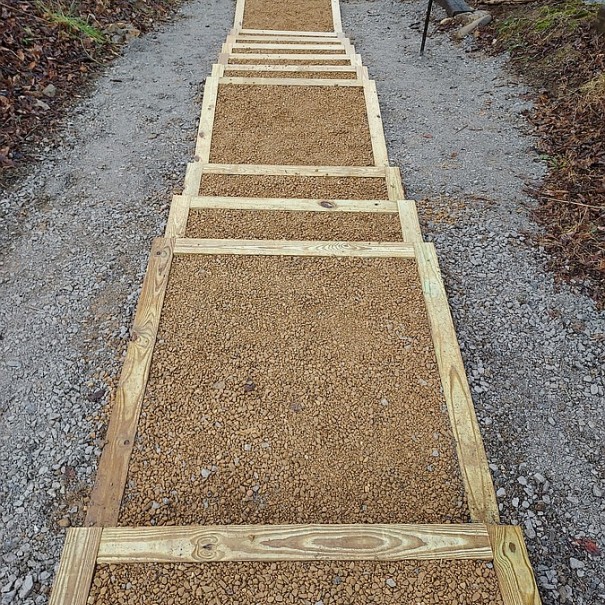 Steps from the top.  30 steps all level and ready for use. 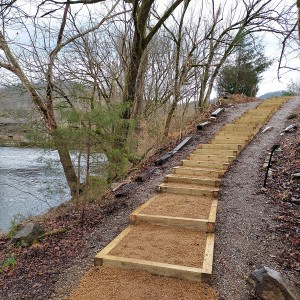 Favorite steps view with The Little River running parallel.  It is quite a sight in the winter. 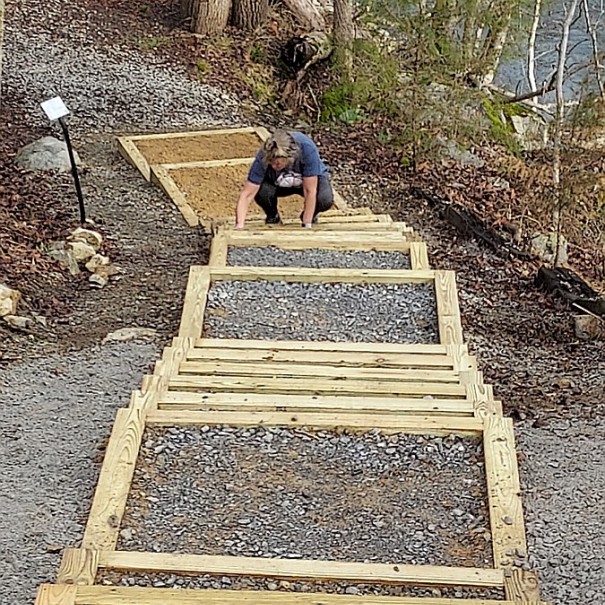 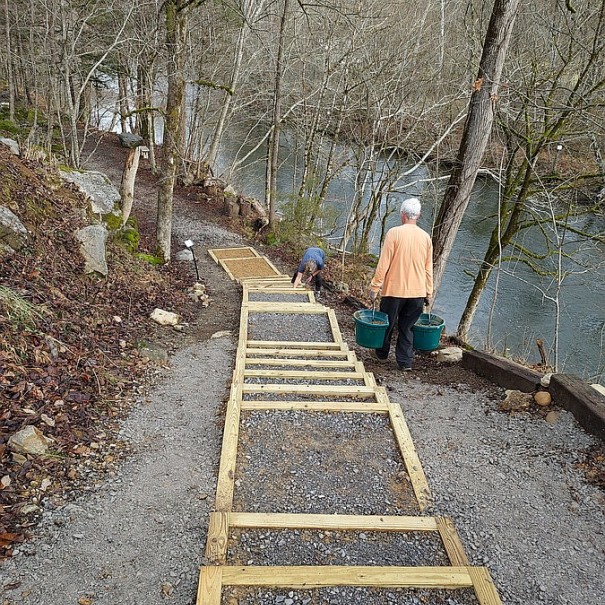 Rodney hand carrying some of the 1800 lbs of Tennessee crushed river rock.

Steps are completed and time to celebrate.

All ready for the final step to be placed.

Looking good, level and square, the last step that is!

Rodney checking out the steps and looking for any possible issues.   Allison did a great job of fixing each side of the steps.

Rodney and Allison check the 28 stairs that have been installed.   After 7 hours of step installation.  It was great to look back on our work.

From the top. 28 steps with a great view of The Little River.  2 more steps to go.

At about stair step 25.  On this day we completed 14 additional stairs bring the total so far to 28 steps!  Two to go!

Trying to stay as contoured to the slope as possible, Mark and Rodney are digging in deep and hoping to avoid large rocks.

Almost to the top.  Although the traffic noise from 321 can be annoying, it was sweet music to our ears as we finally were getting nearer the finish.

Nothing is ever as easy as you hope consider, the "rock" in a "hard place" .

Allison was taking care of some invasive honeysuckle on the steep hillside next to the steps.  Mad a huge difference in the view of the Little River.

Allison and Rodney Pearson after a hard days work.  These steps make a great place to sit and watch the Little River.

14 Steps installed by the 3rd day.  More than half way up the slope.  Only 12 more to complete!

The steps hug the contour of the walk and with great views of the Little River now that Allison Pearson has starting clearing the invasives from the hillside to the river.

The solution for "between a rock and a hard place"  Using our "by the seat of the pants" engineering skills, we made these steps 15 in. deep instead of 18 in. and made the lower pad 3 ft. instead of 4.  The step rests perfectly on the rock.

On the third day the first few steps were a breeze to install.  All the lumber was cut and drilled, just a little digging, leveling and bit of figuring.

Our first go at working thru the rock dilemma.

Mark Seder and Rodney Pearson discuss the rock dilemma and whether or not to quit and go home.  Rodney came up with the perfect solution.

Rodney Pearson and Mark Seder working on the step installation thinking that this is easy peasy.  Little did they know the rock attached to the center of the earth was waiting.

Stair fabricating taking place at our secret facility in the mountains of Walland.

Stairs cut and drilled and ready to be placed at the TRWA.

Mark and Rodney wondering what they got themselves into.

Using the most modern techniques to determine the rise of the stairs.  Mark's eagle eye determined it is a 12 - 15 ft rise.  Rodney just rolls his eyes.

Allison Pearson inspecting the first 18 in. deep step and trying out the new stairs.

Rodney Pearson (left) and Mark Seder, always right.  Installing the first 18 in. deep step that will start a gradual curve.

The old steps.  Kind of steep but have served their purpose well.

You can get a sense of the slope of the old stairs.  The new ones will provide a level place to step.

The new stairs have already made a difference and replaced one of the aging railroad ties.